We are located 4 miles north of Cirencester, between the villages of North Cerney, and Woodmancote. From A435 you take the turning towards Bagendon, go up past the Church to the T junction. Turn right towards Woodmancote and Scrubditch Farm is approximately 100 yards on the right. The Care Farm is situated down the drive, up the track on the left.
From A417, turn off at Perrotts Brook/Daglingworth, and proceed towards Perrotts Brook. Just before the A435, turn left towards Woodmancote. Go for approximately 1 1/2 miles and Scrubditch Farm is on the right, just past the Bagendon/North Cerney Cross Roads.

Final week of the Pilot

Sadly we had to cancel David and William on Monday again, due to a) the freezing weather conditions and b) the burst pipes we had in the portacabins over the previous weekend!  Unfortunately we had forgotten to lag the pipe work, not thinking that we'd have such a cold spell before Christmas....
On Wednesday, great excitement, we arranged to meet our three students and their carers at Winstone, as our local Hunt were meeting there 'on foot'! (It was much too treacherous for horses!) We introduced them all to our masters, and Simon the huntsman, and they sampled Mrs Barnes' legendry fruit cake, and delicious hot sausages prepared by Sue G!  We set off across very snowy fields at Simon's almost trotting pace - quite difficult to keep up cross country - but we were never far behind.  We had a spectacular view across from the Caudle Green road to part of Miserden Wood across the valley - it was a great sight to see the hounds working and the odd dash of colour from Simon, and to hear him on the horn... I think we walked about 8 miles at least - we ended up the far side of Miserden Park, leaving hounds running towards 'Whiteways' (Gloucester way!!)  and then walked all the way back to Winstone.  Luckily, Sue was at home, and gave us all large cups of tea & coffee to recover - thank you Sue! I'm sure we all slept well that night! 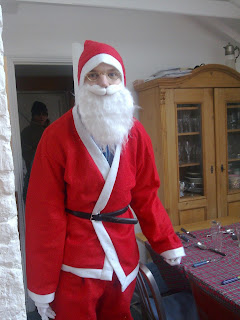 Thursday was our last day - so we invited all the students to lunch in the house.  Tom, Steve & Simon arrived on time at 10am, and spent the morning working furiously to get the poly tunnel cleaned out and cleared up, and they made a compost frame with Bob.  Danny, our other regular Thursday student, arrived early - and could hardly contain his excitement - he kept saying he had a surprise for us - and i just knew he was about to tell us all immediately - we managed to keep his busy cleaning out the ducks for a short time - his attention span was shot to bits with the excitement of it all...!  David arrived at 11am, and i kept him busy in the house, peeling apples for the crumble, as it was much too icy up on site for him - He was a great help, along with Steve, Danny's carer, they helped preparing veg, and making paper chains to decorate the kitchen!  I think we ended up with 17 of us, squashed in round the table - all my helpers were invited, and the 7 students with their carers.  It was a great lunch, and i was particularly touched when Simon stood up and gave a speech at the end of the meal (he said he was shaking with nerves!) to say how much they had all enjoyed taking part in the pilot, and were really looking forward to coming back in January. Ps mustn't forget to mention Danny's surprise - yes, he dressed up as Santa!! - complete with his green wellies on the bottom - i had to play 'Jingle Bells' at his entrance - very special!

For my part, it has been an exhausting, but exhilerating experience, and the highs definately outweigh the lows - there is no better feeling, than when you hear how much these students have got out working alongside us for the last few weeks.  Roll on 2011, and let's hope we get the funding to move the project onwards and upwards!

Happy Christmas to everyone, and see you in the New Year!
Posted by Emma Costley-White at 14:04 No comments:

Posted by Emma Costley-White at 12:56 No comments:

Last week positively flew by - sadly we had to cancel David & William coming out on Monday due to the FREEZING weather.  Wednesday, our three regulars arrived with their carers - complaining about the cold!  We spent the morning de-icing the duck pond, cleaning out the ducks, de-icing the troughs around the farm for the sheep, and generally checking on stuff freezing in the polytunnel.   After lunch in the house, i took the students to Coln House School in Fairford for the afternoon.  Helena made us very welcome and we had a lovely tour of their gardens, greenhouses and polytunnels - complete with hens nesting under the mushroom compost!  Simon & Tom loved handling 'Angel' one of their huge hens - apparently she laid her first egg the next day!  I hope it has inspired the boys to plan for next year, once the weather improves.  Thursday, we had Danny here as well, and once we had explained that it was too cold up on site for the turkeys, and he had checked that 'his' two turkeys were still in the shed - he helped me muck out my horse's stable - attention span very short - whilst the others repeated their de-icing tour.  The highlight of the entire project so far, was Lucy bringing her sausage making equipment down to my house at break time.  We all piled in round the table, and first off made some rolls and left them to prove, and then mixed up bowls of minced pork with, leeks, apples & mixed herbs.  Then the best bit.... everyone took a turn at putting the sausage meet inside the skins - it was hilarious, and Luke videod the evidence, and then played it back on the television for us all to have a good laugh.  We cooked up a batch for lunch, and then they took  a bag of sausages home with them. (Along with a photograph of 'Richmond' the runty pig that Bev named when she was here!)
On Friday morning, Helena from Coln House, brought two of her young students (and the Deputy Head) out to the farm to do work experience.  She assured me that they rather liked 'mucking out' - having been practising at school, so we set them the task of mucking out mum's hen house - hard work, and then Manny my horse's stable - it was bitterly cold, so i tempted them inside for their lunch, and cooked up some more of Lucy's sausages - general consensus - a bit too much pepper - must pass the comments back to her!  It has been great to form a link with Coln House School, and we hope to continue providing work experience for some of their students when they leave school at 16.
The last week of the project approaches, and it will be really sad to say goodbye to the students who have been here over the last 7 weeks - albeit briefly - i hope they will return in January, when we start again.
Posted by Emma Costley-White at 10:41 No comments:

The Paint Club is coming to Cerney Gardens on Thursday 27th June! They are organising this as a fund raiser event for the Care Farm. It’s a great evening, where everyone gets to paint; alongside drinks and nibbles!

Do book your tickets and join us - https://www.thepaintclub.co.uk/events/the-paint-club-fundraiser-at-cerney-house-gardens

The barn was finished in March and the frame is up for the new building - due to be finished in June!
The electricity goes on 2nd week in June - let's hope it's going to be dry for a while ...and warm!
The appeal raised nearly £200,000.00, but there will be extra costs as some items were not included in the original plans.

DATES FOR YOUR DIARY!

OUR NEXT EVER POPULAR VIRTUAL QUIZ WILL BE IN OCTOBER....watch this space for the date!
Held at North Cerney Village Hall twice a year - the quiz is a VIRTUAL quiz - and it's great fun evening - bring your own picnic and drink - £5 per person and teams of four or above.

We had a really successful OPEN FARM SUNDAY....and it was lovely to show off our new location, along with all the animals and our plans

we have a list of volunteer opportunities on our website so do have a look at them!
www.scrubditchcarefarm.org.uk

You can become a 'supporter' of our Project in several ways!
Follow the link below to see how!

Emma Costley-White
Cirencester, Gloucestershire
I have lived at Scrubditch Farm since i was born, apart from a brief spell in London in my early twenties, and live with Mike my husband, in an old stables and granary that he converted over 20 years ago. We have two children, Luke 22, (who at present is in Sydney at University), and Ella nearly 21(Who is living at The Orchard Trust in the Forest of Dean) I have been involved with Paternoster School, a special school in Cirencester for the past 14 years as Ella our daughter was there until 2009. i have been a Governor there for the past 12 years.(Chair of Governors for a long time) and I am still Chair of the Curriculum committee, so have a good understanding of education in the special sector. Previous to my involvement with Paternoster school, i owned my own shop in Cirencester for about 10 years. I sold Hats - and other accessories. Dealing with the public on a daily basis, has given me a wealth of experience with 'people' skills! Having brought up our daughter Ella, with my husband Mike, i have a really good understanding of children and adults with learning difficulties.