We are located 4 miles north of Cirencester, between the villages of North Cerney, and Woodmancote. From A435 you take the turning towards Bagendon, go up past the Church to the T junction. Turn right towards Woodmancote and Scrubditch Farm is approximately 100 yards on the right. The Care Farm is situated down the drive, up the track on the left.
From A417, turn off at Perrotts Brook/Daglingworth, and proceed towards Perrotts Brook. Just before the A435, turn left towards Woodmancote. Go for approximately 1 1/2 miles and Scrubditch Farm is on the right, just past the Bagendon/North Cerney Cross Roads.

Well, i've decided that the best way to tell everyone about my project is to start a blog! I know that most of my friends (especially family!) will find that hard to imagine, as i'm positively allergic to 'facebook' and most other forms of communication, other than email! 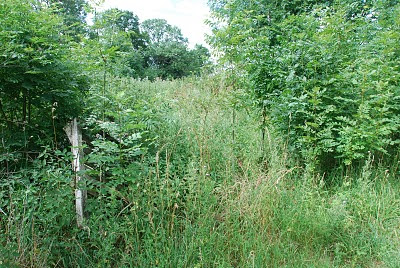 The Care Farm Project started taking shape last year, after a family friend persuaded me that while our daughter Ella, is away at college, i should put my ideas for creating the Care Farm into practise.  Hopefully, we will have the project up and running fairly smoothly by the time Ella finishes her farming college, and then she will be able to help us.   Having 'bagged' a completely overgrown site off my parents, we set to work in July to start clearing it.  (See photos attached)  I naively thought that a group of volunteers and i could clear it by hand, but it quickly became apparent that we would need a serious 'digger'.  With the help of John and Mark, two local builder/clearers, and another friend of the family, who runs a business hiring diggers out, we got the site cleared - i think we ended up hiring one for about 4 weeks!  However, it did mean that we could get it done fairly quickly - we'd never have got going otherwise.  Helen & Chris from Coln House, brought some students over, and with my trusty group of helpers we spent a lovely afternoon, stripping Ash seedlings, stone picking, clearing endless tyres (from the silage clamp that inhabited the site previously) plaiting baler twine, and generally mucking about!  We filled a huge skip with metal detritus from all over the farm, and got the princely sum of £750, from the local metal buyers. 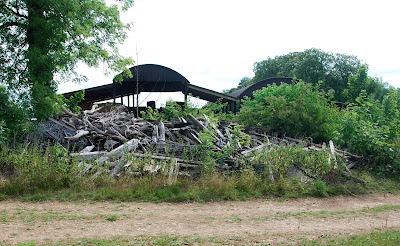 Nearly three months on, and i now have two second hand portacabins (one for a mess room, one for loos) and a 57 foot polytunnel, and a lovely nearly clear site -still with some stone picking to do with the students. 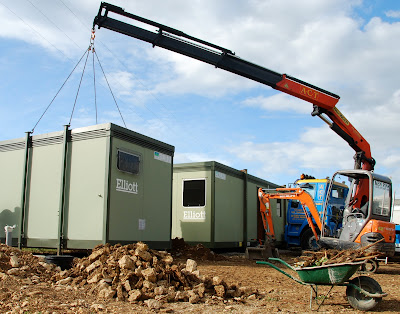 I found the polytunnel on a wonderful website called 'Pre-loved' up near Bromsgrove; where it was being used to house peacocks!  The portacabins came from Avonmouth - there seems to be a maze of them down there.....Again my trusty helper John, had to accompany me, as there was no way Ella and i would have found them on our own!

We had our first 'open morning' two weeks ago, where several Care Homes came for a look round with their residents.  It was a miserable looking day, but even so they were all SO enthusiastic, that it was quite overwhelming, and once again convinced us that we are doing the right thing, offering this facility.  So many adults with learning difficulties, don't have enough to do during the week - no matter what age, we can and will  be able to offer them the chance to become actively involved in the Farm, improving their self esteem, and providing them with skills to give them a better chance of gaining employment.

I haven't begun to mention all the paper work that goes with trying to set up a facility like this - suffice to say it's not for the faint hearted!  We are in the throws of applying for government / charitable trust funding, but of course these things are never simple, and a lot of the funds are only available for Charitable Companies.  We are looking into setting up a charity, but it takes time, and money to do it, and the pilot project needs to take priority, in order to 'feed into' the funding applications.

Now, we have the final week to frantically get enough stuff to keep the students busy over the next 10 weeks for our pilot project!  I am after bulbs to plant up for a Christmas Fair at the end of November, and tools to help build the runs for the chickens & ducks.  My bantams that one of my Carer's mum gave me have laid their first two eggs - so exciting!  I'm hoping that if i leave them she may go broody, and then we can have a little flock of 'oklahoma' bantams!  We will probably wait till the spring to install the pigs, sheep etc., on the site, and the students will in the meantime, help with the farm animals when needed - as long as Health & Safety permits!

I may not post another blog till we have started next Monday - as time is a bit short, but will keep you posted.
Posted by Emma Costley-White at 11:25 1 comment:

The Paint Club is coming to Cerney Gardens on Thursday 27th June! They are organising this as a fund raiser event for the Care Farm. It’s a great evening, where everyone gets to paint; alongside drinks and nibbles!

Do book your tickets and join us - https://www.thepaintclub.co.uk/events/the-paint-club-fundraiser-at-cerney-house-gardens

The barn was finished in March and the frame is up for the new building - due to be finished in June!
The electricity goes on 2nd week in June - let's hope it's going to be dry for a while ...and warm!
The appeal raised nearly £200,000.00, but there will be extra costs as some items were not included in the original plans.

DATES FOR YOUR DIARY!

OUR NEXT EVER POPULAR VIRTUAL QUIZ WILL BE IN OCTOBER....watch this space for the date!
Held at North Cerney Village Hall twice a year - the quiz is a VIRTUAL quiz - and it's great fun evening - bring your own picnic and drink - £5 per person and teams of four or above.

We had a really successful OPEN FARM SUNDAY....and it was lovely to show off our new location, along with all the animals and our plans

we have a list of volunteer opportunities on our website so do have a look at them!
www.scrubditchcarefarm.org.uk

You can become a 'supporter' of our Project in several ways!
Follow the link below to see how!

Emma Costley-White
Cirencester, Gloucestershire
I have lived at Scrubditch Farm since i was born, apart from a brief spell in London in my early twenties, and live with Mike my husband, in an old stables and granary that he converted over 20 years ago. We have two children, Luke 22, (who at present is in Sydney at University), and Ella nearly 21(Who is living at The Orchard Trust in the Forest of Dean) I have been involved with Paternoster School, a special school in Cirencester for the past 14 years as Ella our daughter was there until 2009. i have been a Governor there for the past 12 years.(Chair of Governors for a long time) and I am still Chair of the Curriculum committee, so have a good understanding of education in the special sector. Previous to my involvement with Paternoster school, i owned my own shop in Cirencester for about 10 years. I sold Hats - and other accessories. Dealing with the public on a daily basis, has given me a wealth of experience with 'people' skills! Having brought up our daughter Ella, with my husband Mike, i have a really good understanding of children and adults with learning difficulties.